You have read that in an Elliott Wave bull cycle there are 5 waves that carry prices up. Two of these five waves are corrections. But can we get an irregular correction after wave 5 is completed? This article explains this concept in detail using the example of BHP Australia chart.

What happens after wave 5?

When the bull cycle ends at the top of wave 5, we will get a correction. This correction will be bigger and lasts longer than either of the two corrections that came before. Let me explain this a bit more. We know that waves 1, 3 and 5 are impulse waves. We also know that waves 2 and 4 are corrective waves. Together, these five waves make up the bull cycle. Wave 2 would serve to correct wave 1. Wave 4 will act to correct wave 3.

What kind of corrections can be seen after wave 5 ends?

Can we get an irregular correction after an extended wave 5?

My experience suggests that there is an increased possibility of an irregular correction once an extended wave 5 ends. Let us discuss this possibility in greater detail below.
One of the most useful things to spot in a market that is developing is when a wave seems to extending. It becomes easier still if both the first and third waves were of normal length, because then there is a pretty good chance for the fifth wave to extend. You are even more confident of a fifth wave extension in such cases if the fourth wave was shallow.

Anyway, once the fifth wave extension is over, you should NORMALLY expect a double retracement. The first sell off is the first retracement of the fifth wave. It usually comes to about the minor 2ndwave of the extended fifth wave (but sometimes it stops at the minor 4th wave itself). Then we get the second retracement of the prior move, i.e., we see another “go” at the top, and often as get a ‘throw over” the prior top, or a channel that you could draw using Elliot wave principle. This constitutes the so-called unorthodox top.

Here, dear readers, is where you should be extremely careful. The “C” wave that starts after such an irregular “B” wave top will be so devastating that it could go down all the way to the fourth wave of one higher degree, or worse, to the top of the first wave itself. This has happened in BHP Australia, and the chart below shows the details. 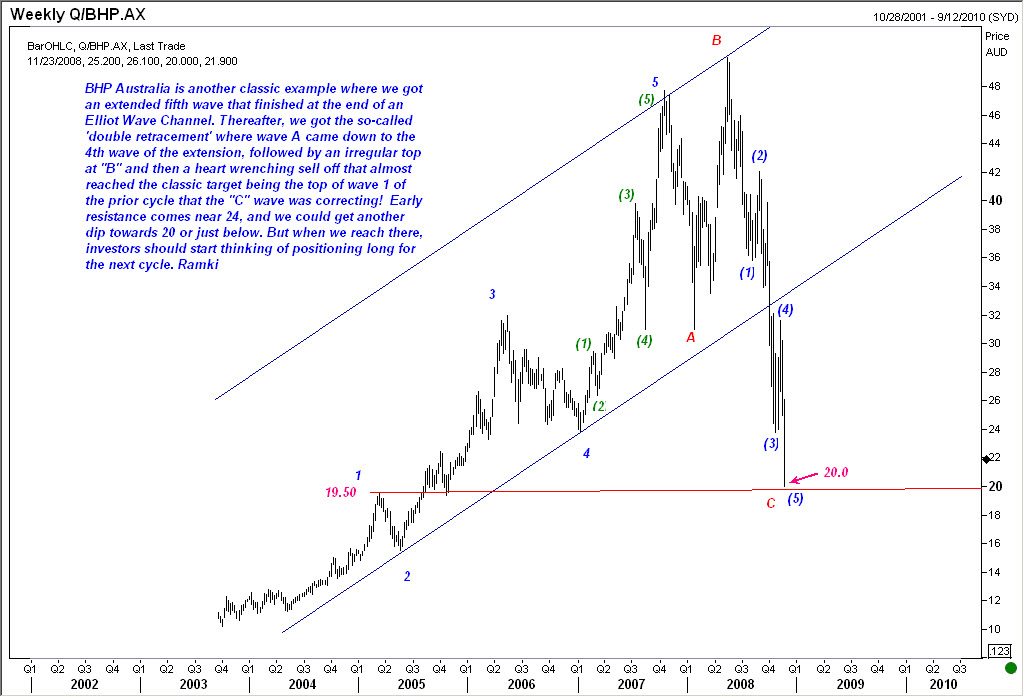 In the above weekly chart of BHP Australia, we see that wave 5 was extended. Once that extended wave 5 was completed, we got a swift sell off down to sub wave 4 of the wave 5. That down move is wave A of the complex correction. Then we got a second retracement back to the top, and this time, Wave B ended ABOVE the top of the extended wave 5. That top is called an irregular wave B top. Thereafter, we got a crushing sell off that reached the top of wave 1. This is a great example of how we can see an irregular correction after an extended wave 5 ends. But we could see an irregular correction like this even if the wave 5 was a regular wave. The only difference is the sell off will usually not be so devastating.

In this article we have discussed what happens after a wave 5 ends. There are two possible kinds of corrections – simple or complex. Among the various complex corrections that are possible, one is a special case known as an irregular correction. This is where an irregular wave B ends above the top of wave 5. When the wave 5 was an extended fifth wave, there is a higher chance of seeing an irregular correction. We have illustrated this phenomenon with the help of a chart of BHP Australia Can We Rely Solely on Fundamental Analysis of Stock Prices?